Next: Exception Handling and I/O with MTL

In a previous post, we added exception handling to a hypothetical API server written in Scala. Since Scala implicitly allows arbitrary I/O anywhere, modeling exception handling by adding a layer of indirection using Either values was essentially free. I wanted to try implementing the same logic in Haskell, which would force us to deal with intermingling exception handling intermingled with explicit I/O, creating two layers of abstraction that we’ll have to juggle.

Let’s do a quick recap of the problem. We are implementing an HTTP API that accepts only POST requests. We have simple Request and Response types.

Our domain types are Users and Resources. We assume that this app is responsible for auth, so we may create a User value from the Request auth token without any I/O. However, we assume that resources are shared between this app and others, so we need to do I/O to get a handle on a Resource.

Once we have the User, Resource, and request body, we execute some database mutation (left undefined) using those three parameters.

handlePost :: Request -> Response is our entry point. The whole program can be summarized as follows:

Each Make sure … step represents a failure where we may need to exit early, returning an appropriate response. Here is the project spec, with nine canned responses:

Next, we’ll take a look at our undefined terms,

Terms that yield Bools are prefixed by is and terms that do I/O are suffixed by io. Finally, (and just because we can) we’ll make a mass-import module,

Easy peasy. getResource will be a somewhat more challenging.

We cannot return an Either Response (IO Resource), because that would mean we decide if we should exit early without doing any I/O, and then return an IO value if we don’t exit early. In fact, since is_resource_not_found_io has type IO Bool, we need to do I/O in order to construct our Either value, so the appropriate return type is IO (Either Response Resource).

The above method looks concise and clear. Unfortunately, it doesn’t compile. implies expects a Bool, but we have an IO Bool to work with.

We add an implies' which is something like implies but is compatible with I/O. The return on the last line maps over the IO in order to lift the Resource to an Either Response Resource. This code compiles, but it does not do what we want it to do.

To see why, suppose is_resource_not_found_io comes back false. Then implies' returns an IO (Either Response ()), but there is no associated bind assignment (e.g., no <-), so the data that the Either Response () represents is completely ignored, and the next line that creates a handle to the nonexistent resource gets executed anyway, potentially leading to data corruption and other undefined behavior. But doesn’t do notation handle the short circuit logic for us? do notation for Either does, but notice that this do block is for IO. It’s completely indeferent to whether the result of implies' is a Left value or a Right value, proceeding to the final line either way. This is harder than I thought it’d be.

We need to find a way to conditionally call the_resource_io. We can do this by introducing a local assignment of type () -> IO Resource which, when called, calls the_resource_io.

The result of implies' is bound to notFound, shedding the IO and leaving an Either Response (). Conceptually, we want to apply doResource to notFound, preserving the short-circuit logic provided by Either. To accomplish this, we use the standard library function traverse (definition below, with type signature specialized to our use case).

I should note that traverse works whenever you replace IO and Either e with an arbitrary Applicative and Traversable, respectively.

We use what we learned from getResource when writing execute. Since we don’t want to write to the resource if the user doesn’t have permission, we want to apply is_executed_io conditionally. We create a temporary () -> IO Bool to wrap it. Our do block will be over IO, so we will need to bind some of our Either values using >>= explicitly.

As we implement handlePost, we’ll make use of the following helper function:

tunnel commutes the outer Either with the IO and then maps over the IO to combine the two Eithers inside.

We’ll want to conditionally apply getResource and execute using the same conditional-execution trick we used in their definitions, so we’ll add a () argument (that we simply ignore) to each.

handlePost needs to take a Request to an IO Response, completely eliminating any Either context. Let’s take a look at handlePost and then discuss.

This is hard work. I’ve heard the saying “monads give you one free abstraction,” and the meaning of that saying really hit home while I was doing this exercise. Once we had two monads in play, the code became significantly more complicated. Fortunately, we have some help. The heavy lifters are fmap (via <$>), the applicative <*>, >> and >>=, and traverse. In general, I find that when I’m stuck in a quagmire of types, traverse (and it’s cousins, for and sequenceA) are exactly what I need to dig my way out. Always keep them in mind.

I made extensive use of standard Haskell tools, such as Hoogle and the REPL. I found that it helps to pay close attention to compiler errors.

Another crutch I lean heavily on is scratch paper and pencil (not pen). For every function here except for getUser, I had to break out the old-fashioned notepad and write some type signatures out. Here I am trying to figure out the implementation of execute. 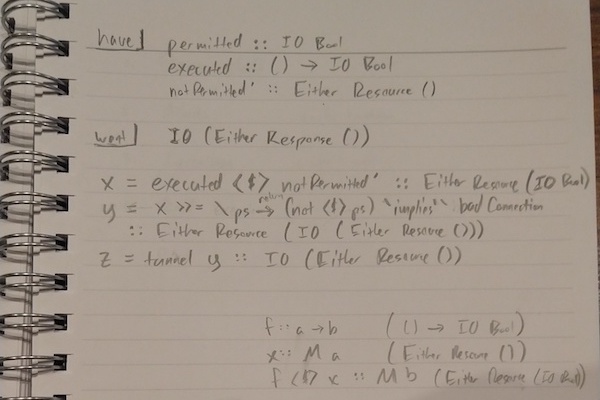 Notice I write out what I have and what I want. If you are a Haskell nomad, I highly recommend you develop your own paper/pencil crutch. Don’t underestimate the insight you can gain from changing your vantage point this way. Specifically, paper and pencil helps me with equational reasoning (a kind of value-level reasoning) and type unification (a kind of type-level reasoning). I should probably write posts about those one of these days.

Most of our woes are caused by using do notation for IO when what we really want is do notation for Either. One way to avoid these woes is to use explicit >>= for our IO, reserving do notation for our conditional logic. I doubt that this would simplify the code significantly. A different approach we could try is using monad transformers to create a composite monad that combines the sequential execution semantics of IO with the short-circuit semantics of Either. I’ve been meaning to learn how to use monad transformers, so if I get motivated enough I’ll write up a post reimplementing this program.

Here are working code examples. With all of these files in the same directory and GHC installed, you can run the tests with runghc Test.hs and open individual files in GHCi.

Next: Exception Handling and I/O with MTL